Civilizations: A Novel by Laurent Binet 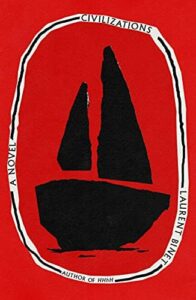 This was a very enjoyable book, and I can’t help but recommend others read this. Each night I would find my self through about 50-100 pages, and unable to sleep after each chapter because I wanted to find out what happened. Bad for my sleep, but a great read.

The book sets up a scenario in which the new world invades the old world. This happens through seeding the new world with germs, and steel from the vikings, and providing them long enough to recover. This portion of the book is the first distinct section written in a style similar to that of the viking sagas. The second section follows the tragic journey of Christopher Columbus, which provides a bridge for the the third section which is the conquest of Europe by the Incas. The final section tells the story of Miguel Cervantes, and his experiences.

The “historical” events of the third section of this book echo stories of the conquest of the Inca’s by Pizzaro. The capture of King Charles stands out in my head since it is described so closely to the accounts of what happened in Peru, with a very limited number of men accomplishing something unthinkable. Some of the language is directly lifted from the accounts in Peru. Even better, most of these actions were inspired by the Inca’s reading of Machiavelli. Overall it was great to see the Inca treated as both a powerful and intellectual group; portrayed as equals or betters to the Europeans.

There is also a great discussion of the management of religion and how much it would have differed without the Christian bend. I was particularly fond of the confusion surrounding the issues between Lutherans and Catholics, and how hard it was for an outsider to understand why there was such a big deal being made about it. I do wonder if you are unfamiliar with these events, if you would also find them as enjoyable.

Overall its a fun read and worth the time investment. It took me around 6 days, but I also had lots of down time that enabled me to get through it faster than I typically do.

I found it on Libby and check it out through the San Francisco Public Library as an ebook.

Like everything else in the world it can be bought on Amazon as well.