This was a quick Sunday morning run, that was a total of 4 miles. The event was put on by the Dolphin South End Runners (DSE), and is a hilly but scenic course through one of my favorite parts of San Francisco. Its a great club, and the run events almost every Sunday. We got lucky with regard to the weather, and while the pavement was wet, there was no rain. The cost of the race was a screaming deal at $10 for non-members, and $5 for a standard member.

The course starts out at the Sutro Reservoir next to the Mid-Town Terrace Playground. You do a loop around the reservoir, and head west on Clarendon until your reach Laguna Honda Blvd then head south and wrap around the hospital. When you reach Portola where you head east to Twin Peaks Blvd, and follow it up and over. Along the way you’ll be treated to sweeping views of downtown San Francisco, and to the west you can see the Pacific Ocean. On your descent down Twin Peaks blvd, you should also be able to see the bay, Marin Headlands and the Golden Gate Bridge. From Twin Peaks blvd, you turn left on Clarendon for one last hill, and then you’re back the reservoir and the finish line.

The sign-in was well run, and efficient. Everyone volunteering for the club was super friendly, and helpful. Post race water and snacks were available, and there were even some home baked cookies, that were delicious. The start line had a large timer, and pull tabs were used for tracking finishing times. 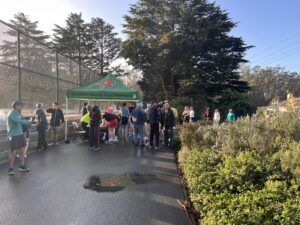 I lined up in the back half of the field, because I knew I wasn’t prepared to run this very fast. I set a personal goal of finishing within an hour(especially since I haven’t been running frequently), and decided to pace myself given the hills. 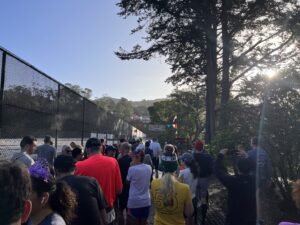 When we started, I ran faster than intended, but felt pretty good. When we turned downhill, I decided to push here. I was able to pass quite a few people, and settled in behind a teenager, and a guy in a blue shirt. I felt if I could keep up with those two I would be in good shape.

When the course began its uphill section at Laguna Honda toward Portola. I locked in and kept running. It quickly became apparent I was loosing the blue runner, but since I liked both my pace and my heart rate I stayed the course. It was pretty uneventful up to the top of Twin Peaks. I passed the teenager, and another runner. I was exchanging places with another runner, who left me in her dust at the flat section of road up top. I think I didn’t pickup my pace enough. A runner, who seemingly came out of nowhere, tried to pass me, and did briefly. He was a few steps ahead when we started our first descent, and I left him behind.

The final segment on Clarendon broke me with the final uphill climb. I walked for a bit, since I felt I was pushing my heart rate too high. This probably cost me a couple minutes. The downhill segment was uneventful, and I turned to the finish line and pushed to get the best time I could.

In the end I finished 2nd for my age group (there were 3), with an overall time for 46:08. It was a great run, and I felt great. I would recommend you take a look at any of the DSE runs if you’re in San Francisco for a weekend.